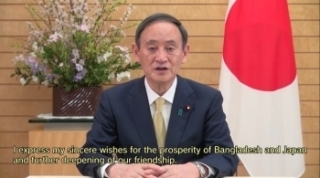 I am SUGA Yoshihide, Prime Minister of Japan.
On behalf of the Government and people of Japan, I would like to offer my heartfelt congratulations on the 50th anniversary of the Independence of the People's Republic of Bangladesh, as well as the centennial birth anniversary of Father of the Nation Bangabandhu Sheikh Mujibur Rahman, the first President of Bangladesh.

50 years ago, Bangabandhu Sheikh Mujibur Rahman, led Bangladesh to independence with his indomitable spirit. Japan was one of the first countries that recognized Bangladesh as a nation state right after its independence, and we had a privilege of welcoming Bangabandhu to Japan.

During his stay in Japan, Bangabandhu visited even farming and fishing villages in rural areas, where he interacted with many local Japanese citizens. He said he considered the development of Japan as a model to follow, and later he made tremendous efforts to strengthen bilateral ties. I understand that it was the idea of Bangabandhu himself to design the Bangladeshi national flag in a way that resembles the Japanese one, just like we are brothers.

Japan and Bangladesh, both having nostalgic yet beautiful landscape of paddy fields, have valued “heart-to-heart exchanges” and have developed profound interactions among citizens at grassroots level.

Just as Japanese children tried hard and collected relief donation for Bangladesh in the aftermath of cyclone at the time of its independence, Bangladesh offered to Japan in the form of relief fund and supplies when the Great East Japan Earthquake struck us 10 years ago. Our traditional friendship is now tied with a strong and firm bond under the spirit of trust, cooperation, and mutual benefit.

Regarding the economic relations, Japan has consistently supported Bangladesh’s efforts toward the realization of “Sonar Bangla” since its independence. Jamuna Multi-purpose Bridge, depicted in 100 taka banknote, and Sonargaon Hotel, built shortly after the independence, have been the symbols of our friendship for a long time.

Moreover, Japan also attaches importance to Bangladesh’s socio-economic development such as health and education and extends support meeting the needs of Bangladesh.

I am confident that Japan’s cooperation in these areas will support Bangladesh’s goal to be a middle income country and then become a developed country, and eventually contribute to further development of our relationship.

Bangladesh, which is located at a key point connecting Southeast Asia and Indian subcontinent and has successfully been achieving high economic growth in recent years, is a very attractive destination for Japanese business community. It is my hope that our economic relations which are marked by a great potential will make a further leap forward in the years to come.

The outbreak of COVID-19 has posed unprecedented challenges to socio-economic activities in the world and between our two countries. In order to overcome this crisis together with Bangladesh, Japan has provided emergency budget support loan, grant of medical equipment, and other emergency support through international organizations for Bangladesh.

The pandemic has also heightened uncertainty, and how we secure peace and stability of the region has become an increasingly important challenge. Building a free and open order based on the rule of law and strengthening connectivity in the Indo-Pacific region will lead to peace, stability and prosperity of the region. Japan will continue to work with Bangladesh to realize a Free and Open Indo-Pacific.

Last but not least, the year 2022 will mark the 50th anniversary of the establishment of diplomatic relations between Japan and Bangladesh. I will join hands with Bangladesh and work together closely to further strengthen our bilateral relationship toward this special year.

I express my sincere wishes for the prosperity of Bangladesh and Japan and further deepening of our friendship.