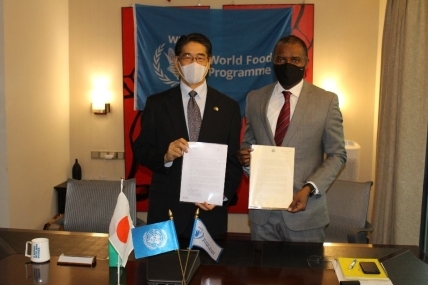 The Government of Japan and the United Nations World Food Programme (WFP) concluded an agreement today which will provide US$ 5 million to support Bangladeshi farmers and people who were displaced from Myanmar. The agreement was signed by WFP Bangladesh Deputy Country Director, Mr Alpha Bah, and the Ambassador of Japan to Bangladesh, H. E. Mr. Naoki Ito, at a ceremony at the WFP Country Office.

Japan’s contribution will support WFP’s Farmers’ Market operation, supporting 2,400 Bangladeshi local farmers in Cox’s Bazar Districts who will provide fresh, locally sourced vegetables at the market servicing 20,000 refugees who were displaced from Myanmar. The WFP farmers’ market model ensures the engagement of local farmers and traders to sell their produce at a fair price, encouraging localization of the food supply chain and injecting money into the local economy.

“I heartily express my congratulations to WFP on winning the Nobel Peace Prize for WFP’s significant contribution to the eradication of world hunger and poverty through food assistance. From this project, both farmers of host Community and displaced people will get benefit. I sincerely hope that this project will be able to support of “Rohingya” refugee and host community in Cox’s Bazar, and to contribute to the stable development of Bangladesh” said Mr. Naoki Ito.

Through WFP’s farmers’ market, refugees have access to fresh foods regularly, directly from the local producers which they purchase using a WFP Assistance Card. By building a symbiotic economic relationship, it also contributes to a peaceful co-existence and social cohesion between those two groups.

This represents a continuation of Japan’s strong support to WFP’s response in Bangladesh. Japan contributed US$ 15 million to WFP Bangladesh in the beginning of the response in 2017, which provided timely funding in a time of great need. In 2019, Japan contributed further US$5 million to support Bangladeshi smallholder farmers in Patuakhali and Cox’s Bazar Districts to support their livelihoods and helped expansion of WFP’s e-voucher programme to the refugee population.

Since the massive influx of refugees into Bangladesh in August 2017, the Government of Japan had granted approximately USD 126 million to international organizations and NGOs, has also contributed approximately 42 million USD to JRP2020, including this support to WFP.

In Cox’s Bazar, WFP provides food assistance to 860,000 Rohingya per month and more than 500,000 vulnerable people in the host community.

The United Nations World Food Programme is the 2020 Nobel Peace Prize Laureate. We are the world’s largest humanitarian organization, saving lives in emergencies and using food assistance to build a pathway to peace, stability and prosperity for people recovering from conflict, disasters and the impact of climate change.