Top > Conferment of The Order of the Rising Sun upon Mr. Mohd. Abu Sayed 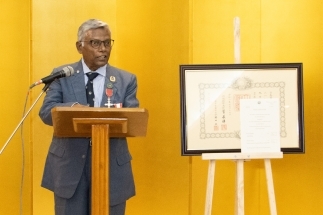 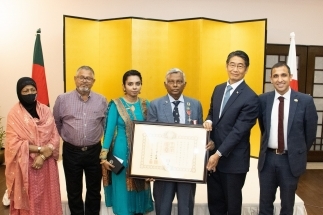 On May 17, the conferment ceremony of “The Order of the Rising Sun, Gold and Silver Rays” to Mr. Mohd. Abu Sayed, former Country Manager of the Commonwealth War Graves Commission in Bangladesh was held at the official residence of H.E. Mr. ITO Naoki, Ambassador of Japan to Bangladesh. The conferral by the Government of Japan is in recognition of his longstanding contribution to taking care of Japanese graves at the war cemeteries of Cumilla and Chattogram in Bangladesh.

Mr. Mohd. Abu Sayed had served for the Commonwealth War Graves Commission of Cumilla and Chattogram in Bangladesh for 33 years since 1987. Respecting the spirit of the Geneva Conventions, he worked in good faith to keep the war cemeteries clean and tranquil, without any distinction between casualties of the Commonwealth of Nations and Japan.

At the ceremony, Ambassador ITO expressed his sincere gratitude to Mr. Mohd. Abu Sayed for his devoted service for the resting place for the fallen including Japanese. Earlier this event, Ambassador ITO visited Mainamati World War Cemetery in Cumilla and paid tribute for all those who perished during the war with his feelings of profound condolences.

Mr. Sayed told in his speech, “This is very happy hour for me and I would like to pay many thanks to H.E. Ambassador of Japan Mr. ITO Naoki and Government of Japan. I’m pleased for this award. I would like to pay many thanks for selecting me for receiving this prestigious award.” He also mentioned that “During my 33 years of service, I tried to work there sincerely and heart and soul. I followed the Geneva Conventions. I looked after all the graves equally and kept clean and tidy.” “Today, I’m receiving this honor not for only me but for all the members I have worked with in this period of 33 years.”