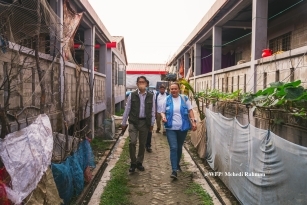 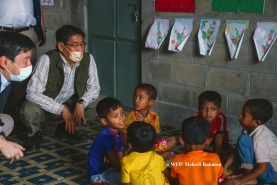 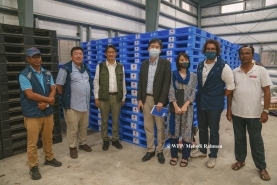 In January 2022, Japan funded as the first donor, USD 2million to UNHCR and WFP to support their operations on Bhasan Char. This mission aimed to overview the ongoing activities under Japan’s funding, as well as explore possible bilateral assistance by JICA in the future.

The mission moved from Chattogram port to Bhasan Char in LCU of Bangladesh Navy, along with over 2,000 Rohingya who relocated to the island on the same day of Japan’s visit. Delegations visited the hospitals, food distribution point, livelihood project, embankment, education center and the community centers for women and children. They had discussions with A-RRRC, Shamsuddoga Nayan and Project Director of Ashrayam-3 project, Rashed Sattan.

Ambassador ITO expressed his appreciation to the dedicated work of UN agencies, NGOs, Navy and the Government of Bangladesh for delivering services to the refuges despite financial and resource constraint. “It was truly eye opening to see the humanitarian responses and efforts of UNHCR, WFP and NGOs such as BRAC, Friendship, GK, Islamic Relief, BDRCS, Qatar Charity, and CODEC. The Government of Bangladesh established solid facilities and infrastructure. While moving with refugees from Chattogram to Bhasan Char, and talking with Rohingya people on the island, I recognized that they relocated from Cox’s Bazar to Bhasan Char in pursuit of better life, more livelihood opportunity and better security. Nevertheless, despite the initial USD 2million funding of Japan and the following support by the other donors, there seemed to be considerable gaps in services and additional funding requirement for further humanitarian responses. I hope the operations on the island will expand to provide more support to the refugee population, and Japan will continue supporting the UNs and NGOs.”, said Ambassador ITO.

Japan will further cooperate with the relevant agencies for better living conditions of Rohingya and host communities both in Cox’s Bazar and Bhasan Char, while making effort for early repatriation to Myanmar. Finding lasting solutions of this crisis will be conducive to our pursuit of “Free and Open Indo-Pacific”.