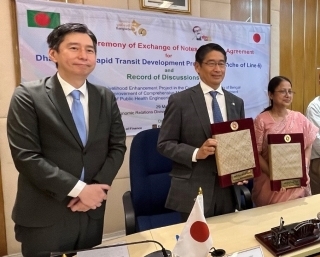 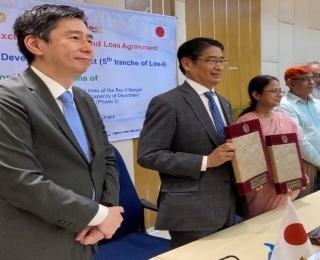 Based on this agreement between the two counties, Mr. HAYAKAWA Yuho, Chief Representative of JICA Bangladesh Office and Ms. Fatima Yasmin signed a relevant loan agreement.

"I’m pleased to be able to sign the Exchange of Notes with regard to 42nd Japanese Yen Loan Package today. The 2nd batch of 42nd Yen Loan of this time will cover the last 1km of the Metro Line 6 extended from Motijir Station to Kamalpur Station,. This year marks the 50th anniversary of the establishment of diplomatic relations between Japan and Bangladesh. The MRT symbolizes the changing face of Dhaka and the friendship between Japan and Bangladesh." said Ambassador ITO at the signing ceremony.
Japan has been the single largest bilateral donor for Bangladesh since 2012, and the total amount of its aid as Yen Loan has reached USD 24.36 billion (commitment base).

After the above signing ceremony, a commencement ceremony for two technical cooperation projects were also held. One project aims to enhance fisheries livelihood of local people in Cox’s Bazar including “Rohingya” host communities, and the other project plans to supply safe water through capacity building of DPHE (Department of Public Health Engineering) staff nationwide.


For detail, please see the appendix.

Summary of each project

a) Objective and Summary
This project is to construct an urban rapid transit line (MRT Line 6), a track-based mass transit system, in Dhaka to meet the transportation demand in the Dhaka metropolitan area, thereby contributing to the economic development of Bangladesh as a whole and improving the urban environment through reducing traffic congestion.