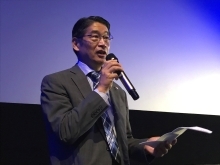 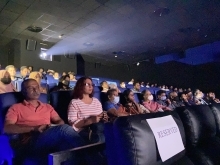 On March 3rd, the Japanese Film Festival 2022 has been inaugurated at the Star Cineplex, SKS Tower. In commemoration of the 50th anniversary of establishing diplomatic relations between Japan and Bangladesh, the Film Festival is jointly organized by the Embassy of Japan, the Japan Foundation, Star Cineplex, and the University of Dhaka. The audiences enjoyed the “Floating Weeds (Ukikusa)” (1959), a classic film by the most acclaimed Japanese Director OZU Yasujiro on Day 1.

Mr. Darius Rahman, Director of Marketing, Star Cineplex Mr. Mahboob Rahman Ruhel gave a congratulatory speech. In his opening speech, Ambassador ITO Naoki stressed, “Throughout the year, this Embassy will make the utmost effort to deepen further the multi-faceted relations, mutual understanding, and exchange of the two peoples. I hope this Film Festival will provide opportunities for promoting cultural exchanges between Japan and Bangladesh and increasing Japanese cinema fans in Dhaka.”