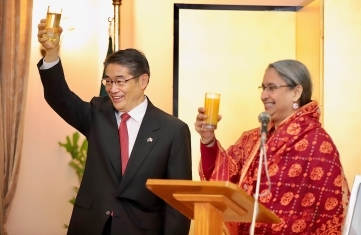 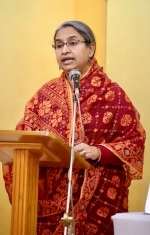 On 23rd February, the birthday of His Majesty the Emperor Naruhito, the Embassy of Japan organized a national day reception to celebrate his 61st birthday.

In his opening speech, Ambassador ITO Naoki mentioned that “Earlier today the Emperor said that [Let us share the pain. Let us cooperate together. I look forward to a bright future ahead of us as we overcome the pandemic with patience.] Though the pandemic affected daily lives of all of us, the year 2020 saw further strengthening of relations between Japan and Bangladesh. Japan supported Bangladesh in its fight against the pandemic and provided for the first time, the budget support of approximately USD 330 million in August last year.”

He also mentioned that “Last August, I signed the largest ever annual yen-loan package of approximately USD 3.2 billion for BIG-B’s quality infrastructure projects. From this milestone year until 2025, we will see completion of those JICA’s mega projects. Dhaka MRT Line 6 will be partially open in December. After that, Special Economic Zone inAraihazar, Hazrat Shahjalal International Airport extention, Matarbari Deep Sea Port and Power Stations, and Bangabandhu Railway Bridge will start operating one after another. Those are essential for the growth of Bangladesh fulfilling its potentials, and will change the face of the nation once they are completed. Japan will continue to extend its support to Bangladesh’s development as much as possible, bearing in mind it also leads to the overall stability and prosperity of Bay of Bengal and Indo-Pacific region, which are conducive to realize our common vision of Free an Open Indo-Pacific (FOIP). ” in his speech.

The chief guest, H.E. Dr. Dipu Moni told in her speech “The role of Japan as a key development partner has been instrumental for Bangladesh to be further developed. Now Bangladesh and Japan are working towards strategic partnership to reach even higher level of bilateral relationship. Since 1972, Bangladesh received largest Official Development Assistance from Japan, making Japan the largest bilateral development partner. Japanese contribution has been of vital importance in the areas of infrastructure and human resource development, agriculture, education, water resource management, disaster management, to name a few. “As trusted partners and peace-loving nations, we have always worked together and supported each other to promote global peace and prosperity. She also mentioned that “The cooperation from Japan is ever more crucial to graduate LDC status”.