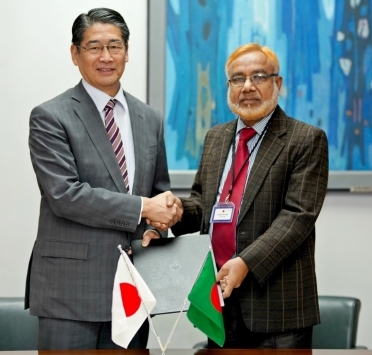 
On 17 December 2019, the Government of Japan extended a grant of $85,247, which is approximately BDT 7 million to a Bangladeshi NGO. Ambassador ITO Naoki signed ‘Grant Contracts’ for Grass-roots Human Security Projects (GGHSP) at the Embassy of Japan with Mr. Md. Alauddin Khan, Executive Director of National Development Programme (NDP).

NDP was awarded the grant for “The Project for Construction of the Loom Training Center in Sirajganj District”. Sirajganj is famous for loom fabrics in Bangladesh, however, this sector does not yield competitive market price due to lack of skills. NDP has been working in Sirajganj district for the purpose of reducing the poverty for a long time. Under GGHSP fund, NDP will construct the loom skill training centre, and install equipment for practical training. Through this project, annually 1,175 people can receive the trainings on loom related skills, so it will contribute to increase in income and creation of the employment in loom industry sector in Sirajganj district.

Japan has supported 194 NGO projects through its Grant Assistance for Grass-roots Human Security Projects (GGHSP) since 1989 with the view to enhance economic and social human security in the grass-roots levels. The total sum of these GGHSP grants extended to NGOs in Bangladesh to date amounts approximately to $ 15 million.